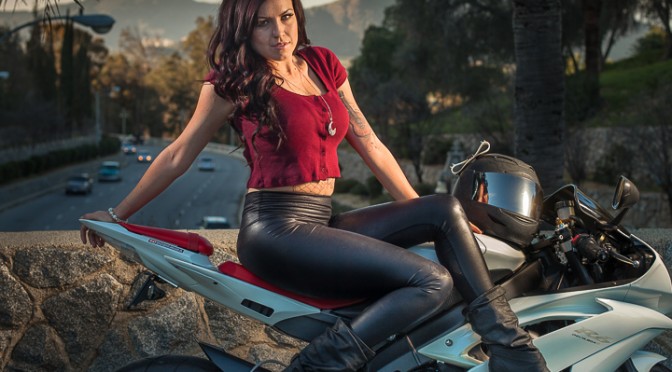 Your concept or idea may be sound but sometimes it just takes more than one attempt before you can taste success.

I had always wanted to photograph a pretty girl on a motorcycle ever since I was a photography student in college.

It never materialized back then.

Working 18 hours a week while going to school fulltime doesn’t allow much time for networking or socializing.

It wasn’t until recently that I met Alex through her mum Kat who owns a Peruvian Paso, that I got a chance to try attempt this photo.

I had to enlist the help of 3 people for this photo shoot and when you see where I was shooting you will see why.

We were on a narrow bridge overlooking a busy street, Mission Inn Ave.

There wasn’t a lot of traffic on the bridge itself but it was narrow, only wide enough for 2 cars.

I had to post 2 persons for traffic control to watch for oncoming traffic.

The 3rd person, I asked to shoot behind-the-scene pictures when I was working.

On most location shoots especially when I anticipate disruptions from traffic, I try to keep my  gear to something manageable.

I used 2 Speedlites inside my softbox and 1 WL studio strobe.

When I attempt this again, I would probably choose a different spot near this location.

The bridge is in the shadow of Mt.Rubidoux quite early  and it becomes  troublesome to manage the contrast and lighting on the tree line in the background.

Since I was trying for an exposure time of at least 10 seconds to get trails of car lights, focusing becomes problematic for my old eyes without bringing in some continuous light source.

Photography is problem solving as I’ve heard it described many  times over.

With any luck, I will get another crack at this. If you live in my area and you know any attractive who rides a  motorcycle, tell them to get a hold of me.

Many, many thanks to Tim Sivils, Spencer Kalnin and Javier Mercado for the help.