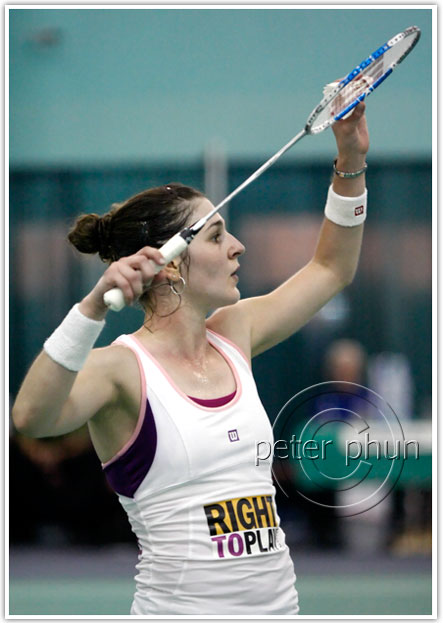 This year’s US Open at the Orange County Badminton Club in Anaheim, California took place over the weekend.

For the uninitiated, badminton is very popular outside of the US.

Here in the US, badminton is regarded as a backyard summer activity and often the brunt of Â jokes.

In fact, a recent radio commercial Â by Â Universal Studios had its young voice actors protesting as if it was torture playing this wonderful sport.

The point of theÂ commercial was lame.

High Serve–Anna Rice of Canada waits to serve to her opponent Nicole Grether of Germany during the Womens’ Semifinal match. Rice dug deep to come back from a one-game deficit to qualify for a place in the Womens Singles final. Her opponent in this year’s final will be Mona Santoso of the US.

A day at Universal Studios will cost at least 5 times more than a whole day of playing badminton.

Lost to many Americans is that the US Mens doubles combination of Tony Gunawan and Howard Bach won the 2005 World Championship.

Badminton is extremely difficult to photograph because

Naturally you can’t use flash or you’ll be thrown out for blinding the players. 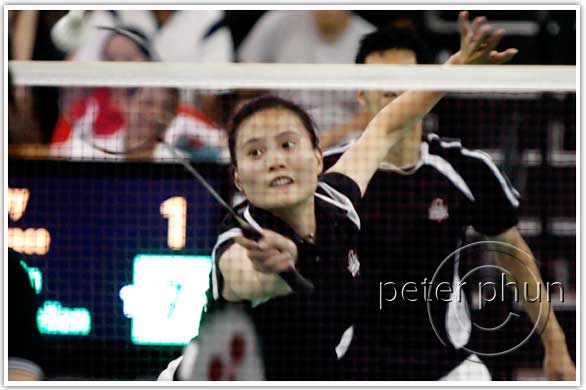 Manning the net–Xuelian Jiang of Canada intercepts a shot at the net during the Mixed Doubles semifinal while her partner Alvin Lau watches in the back. Notice how the scoreboard is placed at a very distracting place on the court? This makes shooting straight on from behind the court a poor option.

The lighting inside the Orange County Badminton Center appears to be some sort of florescent light.

Bright enough for the players to see, but not quite for photography of a speedy sport like badminton.

As with most indoor sports where you can’t use flash, your 1st order of business is to get a good White Balance reading.

I used the Colorright disc to obtain a reference frame from which to set Custom White Balance.

When I switch to the 50mm lens, I used an exposure of 1/500 f2. Even at those speeds the action I barely got a frame of the birdie.

That’s just how fast the birdie travels! It may be a question of timing as well.

By the time you see the action in the viewfinder, it means you’ve probably missed it.

Anticipation is the key in all sports photography.

Knowing when a game is about to turn around or recognizing the shift in momentum in the play, when a player is fatigued and losing or gaining is critical.

That requires photographers to be knowledgeable about many different sports.

Under the current rally system of scoring where the game is played to 21, the pace is very quick especially in doubles play. 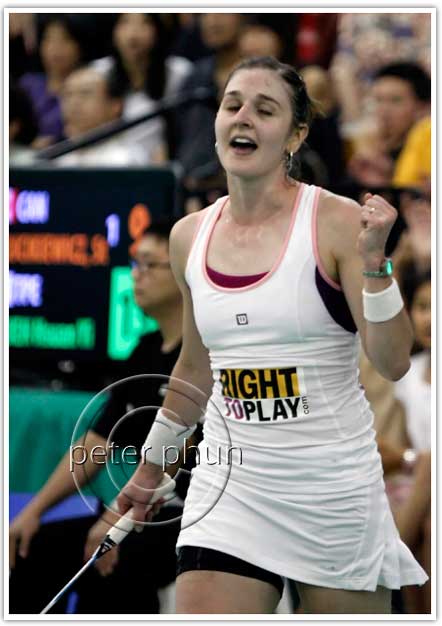 The best strategy is to pick a spot where the backgrounds are least cluttered with your fast and preferable long lens and anticipate.

In this gym, that’s next to impossible because the audience is seated so close to the courts, barely 5 feet from the end of the courts.

This is not always a sure thing. Sometimes players will look for family members in the audience and react.

More often than not, they will be looking to make eye contact with their coach who will be sitting in the back of the court.

These reaction pictures add another dimension to your coverage, one that will separate you from casual shooter.

Sports photography isn’t always about what’s on court during the action. 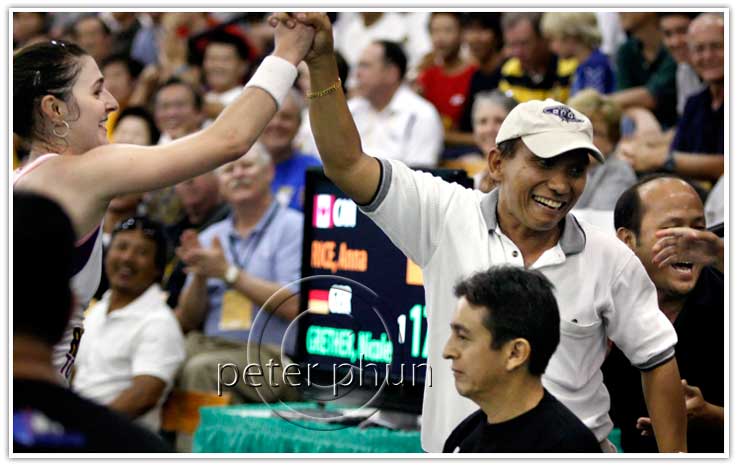 There are subtleties to the game of badminton depending on whether it is a singles or doubles or even mixed doubles game.

Generally speaking, the side that lifts the birdie most tends to be on the defensive. 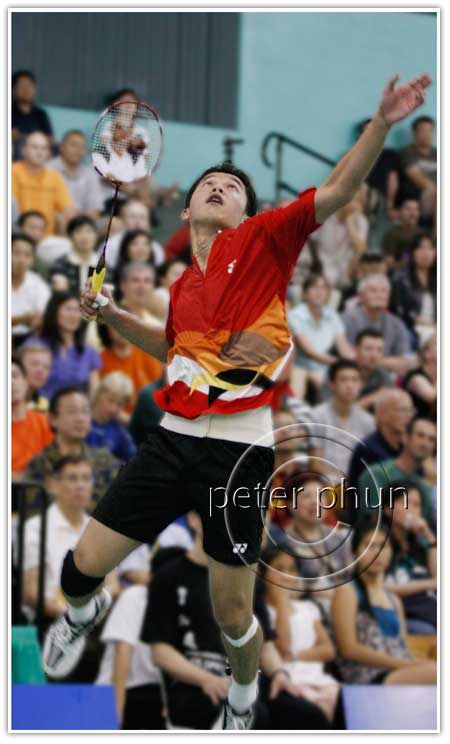 His #4 world ranking was most evident when he took to the court and was barely stretched against opponents like US’s Tam Nguyen and Englishmen Carl Baxter.

He had to switch racquets 4 times in his game against Baxter because after a powerful smash, the strings burst each time.

His backhand smash sounded as thunderous as the forehand smash of his opponents.

I wasn’t the only person who noticed this because the one time he unleashed it yesterday, the crowd erupted.

High flying top seed–World number 4 Taufik launches himself into the air for a jump smash. 50 mm lens 1/500 sec @ f2 ISO 3200. Notice the cluttered background? That’s because the audience is seated only about 5 feet away from the end of the court.

Compare how the lighting in an arena can affect how you can see the birdie.

For the purposes of photography, I love the way the All England venue is lit.

The clutter of the crowd is also removed.