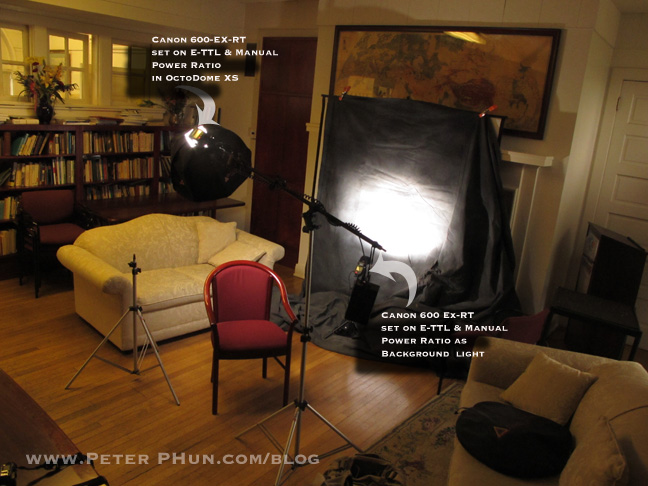 I generally test my gear thoroughly before heading out and using it on jobs.

In the case of a light modifier like a soft box,  I would be wasting invaluable time assembling and disassembling it at every assignment.

So with my Photoflex Octodome extra small, I keep it assembled.

For my portrait session with UC Riverside Mathematics professor Dr. Pamela Clute, as with most of my portraits, I have some an idea of the kind of lighting I want even before I arrive.

On location, unless the spot I’ll be working is one I’m familiar with, I have to plan for the worst case scenario and then be pleasantly surprise if there’s good ambient light to work with.

For that reason, arriving early to set up and having some idea of the light setup I want to use is important.

There’s nothing worse than having to rush.

Details get overlooked and mistakes start creeping in.

One 600-EX-RT into the soft box , 2 reflectors under neath my subject and at the other Speedlite fitted with a snoot and blue gel into the grey background to provide some separation.

I used E-TTL but I also shot some on setting both Speedlites to manual at 1/8th and 1/16th power.

I switched to manual power ratios after I found the exposures on E-TTL to be erratic and at times unpredictable.

That by the way, is a good reason to know about light ratios and how to set your Speedlites to manual power ratios.

I’m a little surprised at how my Lumedyne Supercycler batteries are performing.

Apparently, even with an external power sources connected to the 6t00-EX-RTs, they still somehow drain the power of the 4 AA batteries inside the units.
Peter Phun Photography