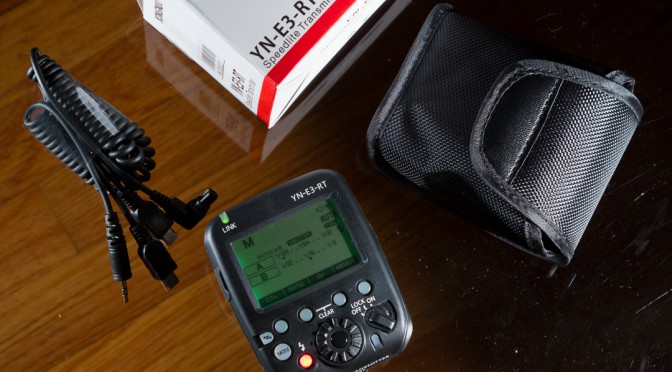 I’ve been using Canon’s latest Speedlite for over a year now along with its companion transmitter ST-E3-RT.

When I learned of 3rd party Speedlite manufacturer Yongnuo making a knock-off, I ordered one.

Their  YN-E-3-RT triggers the newer Canon 600-EX-RT Speedlites just like the ST-E3-RTs.

The LCD display is identical.

Makes me wonder how Yongnuo can get away with this, actually.

When placed side-by-side, they look almost the same.

What is important is the dials and menus are the same so there isn’t a learning curve once you’ve become familiar with Canon’s ST-E3-RT.

Yongnuo’s transmitter  has an infra red beam emitter to aid with focusing in low light.

It’s not often that a 3rd party manufacturer can make something better than the original manufacturer and at a lower price.

Yongnuo’s transmitter is about half the price of Canon’s.

My light modifier of choice  on location is the Photoflex Octodome XS.

Light, easy to set up and it controls light spill very well because I have the optional grid.

Umbrellas work ok, but I found those to be a pain whenever there are windows or other reflective surfaces nearby.

Outdoors, umbrellas tend to get picked up by wind and that can be a disaster for your lighting gear if you don’t have sand bags.

I’ve always used my Speedlites by setting their output  manually.

I am that much of a control freak.

The other reason is because none my camera bodies, the 40D or 5DMark2, are capable of taking full advantage of the ETTL functions.

When I do upgrade to a 2012 or newer body, I’m told I will get full functionality and automation of the new Speedlites.

I am so accustomed to setting my ratios manually, I love not having to walk over to my Speedlites and manually changing the power output.

That allows me to work a lot faster and efficiently on location.

When I do upgrade my camera bodies, I can see using E-TTL more and more but until then this setup suits my every needs.

Now I’m waiting for their version of the YN 600 EX-RT Speedlite.

It was supposed to been available a while ago but so far no sign of it.