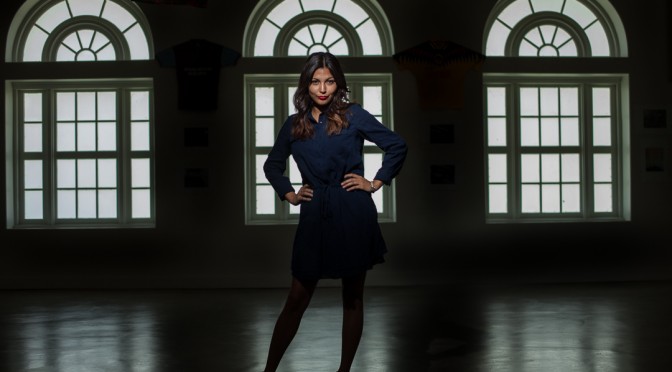 Gear can make all the difference.

But it took a while before I realized I could get by if I only thought carefully about my approach when it comes to portraiture.

One Speedlite used off-camera can give good results.

The key is not to over light.

During a demo for my “Moving from Snapshots to Portraiture” workshop at the Riverside Art Museum, I used the Art Alliance Gallery to illustrate this point.

Of course it helps to have a pretty model like Jessica Neblina.

Here’s how I approached this:

Light modifiers for us photographers are tools much like different size brushes to artists who paint.

Too much light spill on the background and immediately we lose the dark shadows and the picture frames hanging on the wall between between the windows become apparent  and a distraction ruining the graphical element.

You don’t need to spend a lot of money on light modifiers. You can make your own snoot.

If you don’t feel like doing it yourself, grab Honl’s grid spot.
Peter Phun Photography