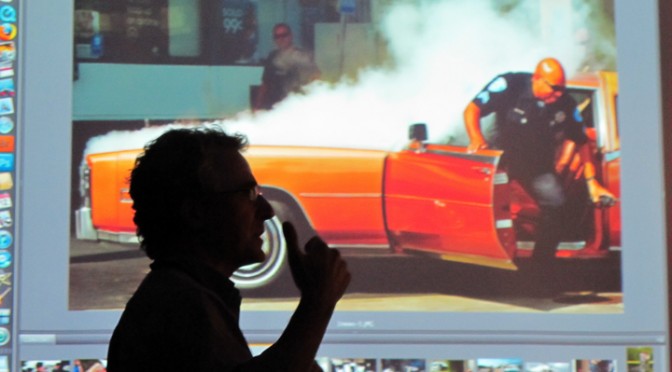 If you happen to know someone who used to work  as a news photographer and you are interested in photography, buy them a drink or a cup of coffee.

I can assure you it will be worth  your time.

Not only will they have some interesting pictures to share, they should have matching compelling stories as well.

You will hear about the bizarre, the unusual, the creepiest and  just about any of the other superlatives you can think of.

News photographers find themselves in all sorts of situations and are often eyewitnesses to ‘breaking news’ as they unfold.

Unlike tv video newsmen, news photographers tend to work alone except for the occasionally pairing with a reporter on special projects.

Sadly,  their numbers are dwindling these days as newspaper owners  realize there are few breaking news incidents that happen today where no one with a cellphone is around to document it.

I’m sure you’ve heard of Pulitzer Prize winning photographers being laid off like photojournalist John H. White from Chicago Sun-Times.

When I left the Press-Enterprise newspaper, there were close to 20 staff photographers.

In general, photography as a vocation has always been competitive but I dare say in its day, there wasn’t a more competitive field than newspaper photography.

As a career, I would say it was more fun than anything I’ve ever done. But along with the fun, there was some not so pleasant moments.

I have been a witness to some sad and very tragic events where there have been loss of lives.

Those I wish I could have avoided but you have to take the good with the bad.

Ones I would like to forget to be honest.

Recently I was contacted out of the blue by Douglas Remy who lost his sydiving friends in one of the worst plane crashes involving skydivers.

Very briefly, on April 22, 1992 I found myself on scene at a plane crash at Perris Valley airport.

I heard the dispatches for 1st responders and was only minutes away.

I seldom arrive before them because they have the lights and sirens so I was surprised when I actually arrived before some of the first responders.

It was extremely emotional and tensions were very high.

I stayed out of the way and back so that the paramedics could work.

I was so close, the police actually cordoned off the area with me inside.

Days after when I went back to look over my raw film, I couldn’t even remember taking some of the pictures.

Probably some of the more mundane  pictures I ever took but the circumstances made the picture newsworthy.

I was driving or cruising and looking for pictures when I overheard a dispatcher frantically asking for a German translator followed by an ambulance.

I immediately headed up the mountain and before long, an ambulance was behind me.

I pulled over and let them pass.

By the time I arrived, the gunshot victims had been airlifted to a trauma center of the closest hospital.

I recall I took some pictures of the rental car and some objects covered in blood on the ground.

By the time I drove down the mountain and back to the newspaper, German news agencies were already asking for my pictures.

Mind you this was before the advancements of the internet and search engines.

I still have ties with some who have left the news business but in case you missed those posts, here they are again: