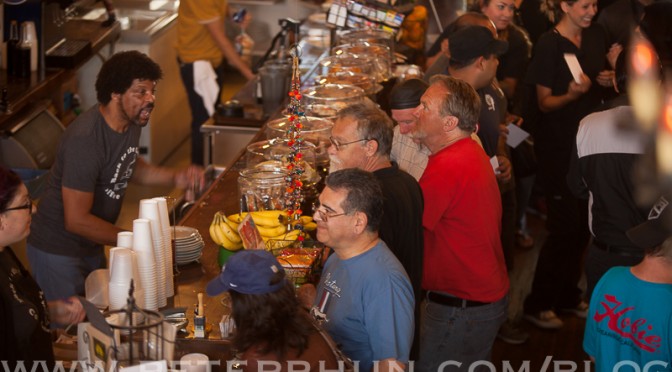 I spent early Wednesday morning with at least 500 Riversiders who flocked to our favorite coffeehouse Back to the Grind.

Darren Conkerite, Back to the Grind’s owner, told me afterwards, his staff must have served at least 500 cups of coffee and tea.

Community effort also brought together a gathering with local music band Quita Peñas in the parking lot behind this popular coffeehouse.

My buddy Riverside County Department of Animal Services Senior Public Information Officer John Welsh also brought a selection of very cute dogs for adoption at a special price of $11 each.

Inside the coffeehouse, another local favorite “Summer Twins” played, alternating with DJ music.

Reporters Araksya Karapetyan and Sandra Endo mingled, interviewed the mayor Rusty Bailey and regulars when they weren’t mobbed for requests to be in selfies with their fans.

Both reporters kept the energy level high throughout their 3-hour takeover.

Between going on the air with their ‘live’ segments,  Karapetyan and Endo joined the crowd outside dancing in the back parking lot.

At its busiest time, the line snaked outside as mums with strollers stood in line alongside  transients and downtown office workers.

[Galleries 81 not found]Even though it took quite a wait to get a coffee or tea, no one seemed to mind since it was free and there was soothing music by Summer Twins.

There were plenty of kids too who were kept busy with tables of crayons and colored pencils provided by Jon Roach.

In the basement, Kaelah Wilson with her ukulele  entertained youngsters creating art on large tables.

Fox11Good Day L.A. Takeover Back to the Grind coffeehouse in Riverside from Peter Phun on Vimeo.

In case you missed it on tv or wasn’t able to see it ‘live’ this was the segment that was recorded and broadcast.
Thank you Araksya Karapetyan and Sandra Endo and your tv crew for coming out to Riverside.