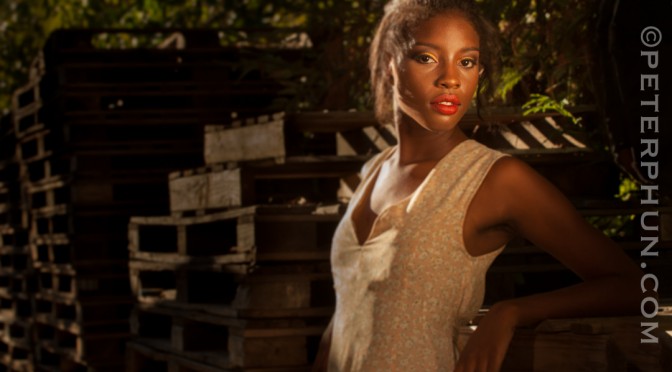 Last year I participated in this invitation-only event for the first time when I only had 3 hours to spare.

But there wasn’t enough time to photograph any of them with wardrobe changes.

Temperatures on that day were triple digits outdoors.

So I stayed indoors with  4 of my models, going outside only after the sun started its descent into the evening sky, around 4pm.

As with the previous year, even though I had my White Lightning WL-800 studio strobe, I only used Speedlites; they are portable and therefore faster to use.

My main lights this time were 2 600EX-RT inside Photoflex’s Octodome and a Yongnuo 600-EX-RT fitted with MagMod’s Grid modifier.

As usual I prefer to use my Speedlites in Manual mode so I can dial in precisely the amount of light I want.

I had not seen Miracle Guillory in over a year.

We had made some very nice images last year so I felt so fortunate to come across her.

Most importantly at the end of the day, she was dressed to match my muse.

Earlier she was dressed  as one of the many Disney princess characters.

I’ve seen a few of the Disney cartoons when my kids were younger but because I didn’t recognize her character,  I had to pass on that.

The makeup artist and hair stylists did a wonderful job with her Disney character but I was out of my element.

I also knew I didn’t want to photograph Miracle in high key because that would entail breaking out white backdrops and a lot more power than what my measly Speedlites can provide.

So we took a stroll outdoors and as luck would have it, the sun was just starting its descent but still peeking over the roof in the west.

As I positioned Miracle against the wooden pallets, the first thing I noticed, being a straight guy,  is how sensual her legs looked in her sheer see-through dress.

I’ve always believe that no one can light better than the Almighty.

The backlighting from the sun so clearly highlighted her form and figure, it was so eye-catching.

I knew I wanted to preserve that, so I made sure to expose for that.

All that was left to do was to make sure when I light her face, which was in heavy shadow,  that I didn’t indiscriminately destroy the shadow by over lighting.

That’s why I used the Magmod grid on the left to aim a narrow beam at her face on the left and also my small Photoflex Octodome light modifier fitted with the egg crate diffuser to prevent light spilling all over.

That’s it for now.

Please let me know by comments if you’d like to see the other pictures I got of the other models.