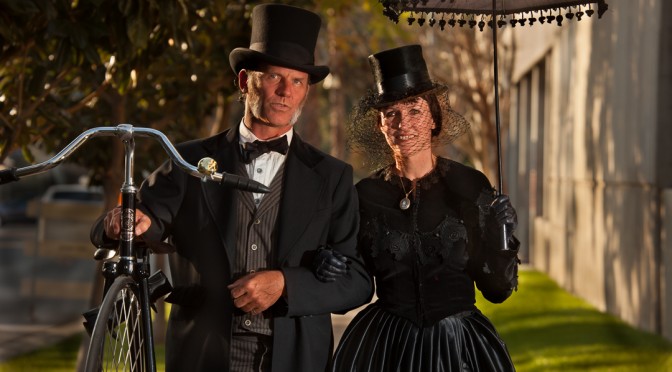 Every year I try to make it downtown during the Dickens Festival.

The site for this year’s festivities was the pedestrian mall on Main Street between city hall and University Ave.

I arrived around 3:30p when the light was perfect.

Because of the smaller area and how vendors were positioned, it became obvious if I wanted to photograph someone, I would have to ask them to accompany me to a better location.

I didn’t attempt that with everyone I saw except those who appeared exceptional in their costumes.

The couple with the Penny Farthing for instance demanded this extra effort.

I even used my Canon 600EX-RT Speedlite because I knew their predominantly black outfits would require supplementary lighting.

The picture of the exquisite Victorian lass could have benefitted from my use of lighting as well.

I didn’t have a place to set my Speedlite but I could have asked someone to hold it, I suppose.

You tell me if my results required that flash.

Because her outfit wasn’t black, I was confident I could get away without the use of flash.

When I came across the gentleman dressed as the Chimney Sweep like in Mary Poppins, I had to ask if he would step away from the crowds as well.

In retrospect if I had to do this over, I would probably asked if he would step into the parking structure so that I could get even more directional light.

If you have any opinions, feel free to voice them under comments below.

Or if you were also downtown, do share your images by commenting.

You will see that you can actually upload your pictures there.

Are you curious as to what the scene would look like had I not used my Speedlite?

Mouse over the picture below.