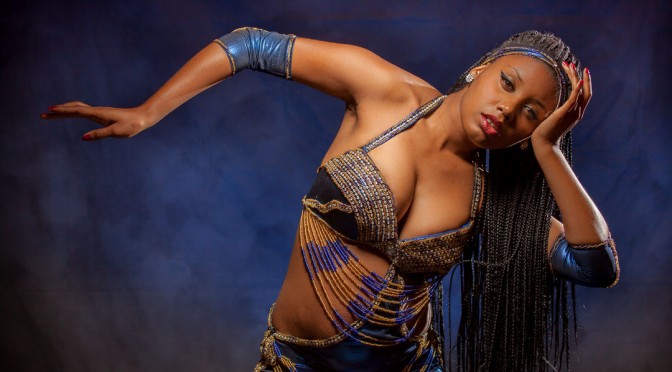 After a long wait, I finally got the 3 sets of Mag Mod Speedlite modifiers which I ordered via Kickstarter.

I had no trouble figuring out I needed to stretch the elastic bands around the head of my Canon 600-EX-RT Speedlites.

Once on, they stayed on.

One unintended side effect of these magnets being on the Speedlites was the increase in bulk.

Something in my Domke bag now has to be left behind or I have to pack those Speedlites with attached Mag Mod grips separately.

In the back of my mind, I can’t help but wonder if the strong magnetic field will affect either the digital camera bodies or the memory cards or even the Speedlites.

Too soon to tell but I’m sure we’ll find out.

I took an opportunity to use the modifiers during the local Art Walk here in town.

I got a bellydancing friend, Koko to model for me at the Riverside Art Museum as part of an off-camera flash demonstration.

The main light, a 600-EX-RT Speedlite, was attached to an XS Photoflex Octodome which was mounted on a Cowboy Studio boom.

A background light (2nd 600 EX-RT Speedlite) was attached with the Mag Mod blue gel when I photographed Koko in her bellydancing outfit.

That light was placed on the floor behind Koko and aimed upwards towards the grey backdrop.

The hair light for separation  (3rd 600EX-RT Speedlite) was fitted with the Mag Mod’s grid and mounted a regular light stand aimed towards Koko’s head about  7o’clock.

All the Speedlites were set to fire on manual power which I easily dialed in from the STE-3-RT.

Because it was dark inside the gallery, I used an incandescent light off to the side to aid me with focusing.

If there were any awkwardness, it would have to be figuring out which orientation I need when stacking the grid and a gel to prevent reverse polarity. That is a minor issue which will go away through familiarity of use.

Next: More pictures from this photoshoot.
Peter Phun Photography