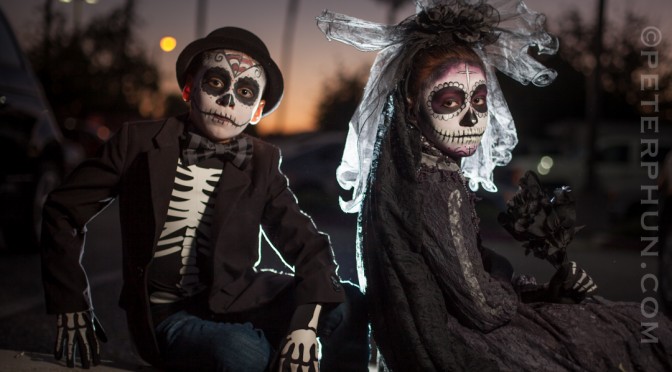 Though it is in its twelfth year and I’ve attended each and every one of them, I still look forward to it because of its uniqueness.

Unlike the other festivals, this is probably the only one where folks attending expect to be photographed because they come all decked up in costume and makeup.

So if you like taking pictures of people, this is one not to miss.

This very unique one-day event is usually celebrated on Nov 1st or 2nd in southern California but over the years Riverside’s festival has grown in size.

So the logistics of staging the event in the city’s downtown has caused Cosme Cordova, the organizer and owner of Division 9 Art Gallery to set future Day of the Dead festival for the 1st Saturday of November.

At this very crowded festival, it is often tempting to just accept the lighting conditions as you see it.

By 4pm, the sun is starting its descent and the light is very directional so a lot of areas are already in shadow.

But  I didn’t feel like dragging light stands all over so I improvised a by using my monopod and my Lumiquest softbox.

It may be getting harder each year but that’s the fun of it.

This year my photograph of Aztec dancer Ariana was featured on the electronic marquee by the 91 freeway near Mission Inn ave exit to promote the festival.

The festival was scheduled from 3p to 10p.

The site of the festival was along Market Street running south from University Ave to 12 St.

As with previous years, there were 3 stages: Altura at University Ave, Aztec at 10th/Market and Salsa at 12th.

Live music from the like the group Tierra was on the Altura stage, folklorico dancers performed at the Aztec stage and DJ music was at the Salsa stage.

Riverside’s Day of the Dead festival 2015 from Peter Phun on Vimeo.