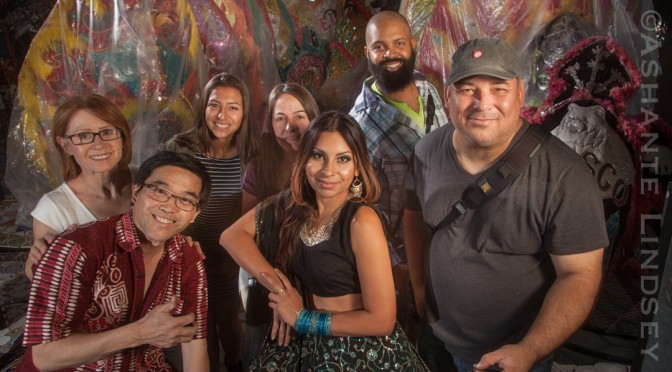 In my previous post about using small flashes at  Tios Tacos restaurant, I made some pictures of Izzy and Kavita with some behind-the-scene pictures to give you a sense of the conditions we were working with.

So it’s time to see what my students came up with.

A misconception that many folks have about instructors teaching portraiture and photography in general is: the instructor wants all his students to take the picture exactly he would.

In my case, I don’t want that.

If that were the case, I’d be in trouble because there would be so many carbon copy clones of me running around and I would be out of business.

I hope by showing my technique and explaining the rationale my students will figure out their own approach.

The gist of my approach when using Speedlites on location is this: with just 1 Speedlite powered by 4AA batteries, I can’t expect to overpower the sun even though it is 98 million miles away. So unless I’m  lucky to be under a cloudy overcast sky, I’m better off learning to work with what’s available as a light source and incorporating the Speedlite either as a fill or a key (main) light.

So I began by showing where to find and how to use existing light with Madiha who was assisting me as my model.

I positioned Madiha so that she was backlit by the sun.

Then it was a matter of finding a background that was darker so she stood out.

I placed a Canon 580EXII Speedlite with a 33′ long off-camera flash cord on a swivel bracket and mounted it on a light stand.

The reason I chose this particular Speedlite? My particular Canon camera body and many others in the Canon line allow users to control the 430EXII, 580EXII and 600EX-RT Speedlites using the menu on the back of the camera body making it a lot easier  than walking over to the Speedlite on the light stand  and wrestling with the little buttons on the Speedlite.