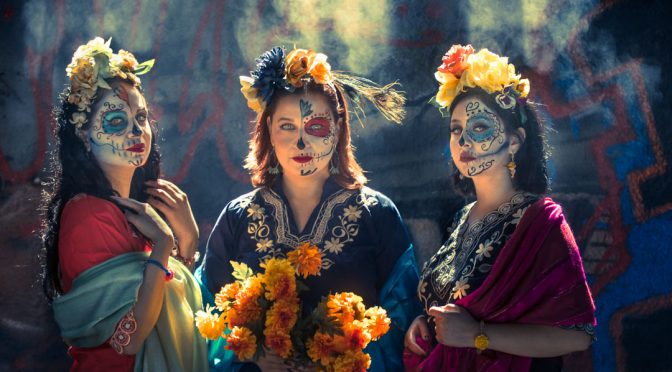 This year when I got together with my very talented friend, Mexican artist Fryda Fernandez, to create some Catrina  pictures for the “El Dia de los Muertos” (Day of the Dead) theme, she did not disappoint with her makeup creations and styling.

This year we decided to take it outdoors on location.

Part 1 of our shoot was at  an abandoned building and Part 2 was on the grounds of my buddy Martin Sanchez’s Tios Tacos restaurant in downtown Riverside.

For the 1st part, we recruited Nancy and her sister Rocio.

I also had the invaluable assistance of Marvin Sesuca. Without Marvin’s help the shoot wouldn’t have gone as smoothly.

Studios while being  convenient because they allow you absolute control over the lighting and easy access to  restrooms, makeup areas and other amenities have down sides.

A studio doesn’t character and ambiance unless you create it because it is essentially a big empty box with walls.

Everyone needs to be on time especially if the site is not easily found or accessible.

I scouted the place in advance to find the easiest foot path taking into consideration the equipment I had to bring.

So I made sure to pack carefully and weighed the pros and cons of every piece of gear.

After shooting at the abandoned building, working at Tios Tacos restaurant with just Fryda by herself was such a breeze.

It was nice to be able to go the the car and get my gear as I needed it.

So I brought along the Orlit Rovelight which can be triggered and controlled by Canon’s ST-E3-RT transmitter.

It’s about a 6-lb studio strobe with the battery– not exactly portable– so it required a light stand that was heavier.

Too often  folks spend close to $500 for a  high end speedlite only to  put that on a cheap light stand. It’s not prudent.

Don’t forget with most strobes or speedlites, by the time you add a light modifier whether it’s an umbrella or softbox, that makes the entire light weigh an additional 1 to 2 more pounds.

Part 2–At the 2nd location, the grounds of Tios Tacos restaurant,  I arranged for Fryda to meet me in the evening at 5pm.

At 5pm with the sun setting, I didn’t need the power of the Orlit Rovelight strobe, I just needed many smaller Speedlites.