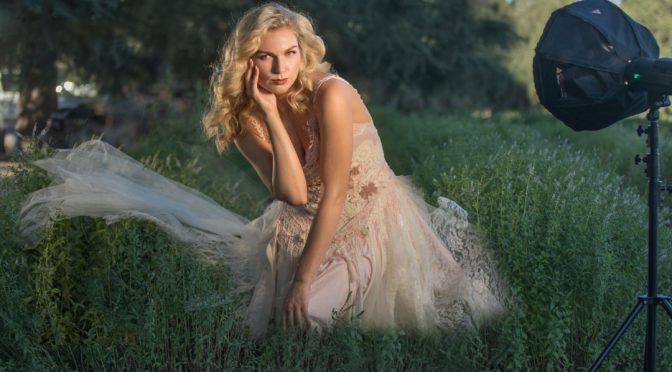 Now that I’ve actually put the Orlit Rovelight RT610 and its companion transmitter TR611 on at least 2 on-location shoots, I feel I can objectively say what I like and dislike about it.

I originally purchased it through Amazon but due to poor quality control, blame either Adorama or the manufacturer, I received a unit that was DOA (dead on arrival).

As for my refund? Well, that was only processed by Amazon after the DOA item arrived  at Adorama and they communicated. Loss of time about 4 weeks total. A good thing I didn’t count it for a job.

Worth noting is this: on Amazon, it appears Orlit is bundling the Rovelight with a different control other the one I received.  See the ad on the left.

Before I placed my order, I must have researched the various monolights that are out there at the moment for at least a few months.

There is good news for those thinking of getting some sort of monolight that is a battery powered because there are so many, it’s enough to make your head spin.

If it isn’t obvious why I mentioned my lighting kit, it’s simply this: whichever strobe I buy, I want to be sure I can get it to work with my existing Canon Speedlites.

Nothing worse than buying a monolight which uses a separate triggering/tansmitter/control system not compatible with the Speedlites I own. Whenever I shop for equipment, I want to make sure the system is scalable. Meaning if I buy other flash units I want to make sure at the minimum they will at least fire when I need them to fire. If I’m not able to control the output of that flash unit, it’s not such a big deal because I can always manually set the power.

This Rovelight 610 weighs about 6 pounds with the battery installed, The unit itself isn’t that pretty or ugly and its appearance shouldn’t matter. It does feel plasticky so it’s a foregone conclusion that it’s not designed like Paul C Buff’s White Lightning’s line of monolights.

As I write this,  I can already feel the body has some part that feels loose after this short time of use. I have to make a mental note to be extra careful about throwing it around inside my car.

It’s very tempting to do a review right off the bat when I get a piece of equipment but there’s no good way to simulate working conditions.  It’s only through actual use can you encounter the problems and figure out its shortcomings and then hopefully find workarounds.

I’ve never used the more expensive Profotos so I can’t speak to how well those work against this much cheaper strobe. I believe the difference is about $1K.

The Yongnuo’s that I mentioned above DO NOT WORK with this monolight.

It’s strange because the Canon can co-exist and plays nice with the Yongnuos but for whatever reason, the Orlit Rovelight 610 doesn’t work with the Yongnuo 600EX-RT Speedlite or its companion transmitter YN E3-RT.

That being said, the unit doesn’t allow me to simultaneously use my STE3-RT with the TR611. So I have to choose one or the other. Is that a deal-breaker, not really. However, I sometimes shoot with 2 bodies and having 2 transmitters is a great convenience.

The range of the transmitter and the unit is sketchy. When I was working inside an empty 1500 square feet interior of an abandoned building, I lost the radio connection several times and had to turn everything off and on again to get it to work. It’s an annoyance which really shouldn’t happen since I never encountered this with my Canon Speedlites.

For about the same price as a Canon 600EX-RT Speedlite, the Rovelight is 11 times more powerful than the Speedlite but I don’t believe this product is reliable enough. It has quirkiness like the phantom modeling light that comes on mysteriously and stays on when you least expect it. That is important to note because it is a drain on battery life.

The manufacturer points out that there is a mini usb port on the unit for firmware updates etc.

My feeling? If the product was finished and polished for the market, there needn’t be something like that so the quality control is definitely suspect as are many of these products made in China. I can only give Rovelight 610 a lukewarm 3 stars out of 5.

If you’re in the market for a monolight compatible with your Canon 600EX-RTs hold off or test another brand. I still need to run some tests to determine if the color temperature of the unit at various power settings is acceptable and will update this review.
Peter Phun Photography