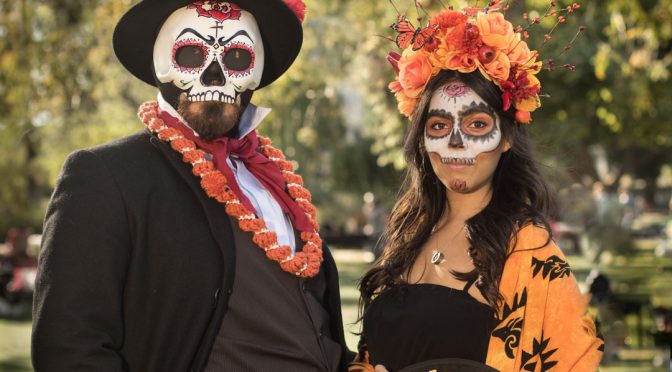 This year’s Day of the Dead festival which is always held on the 1st Saturday of November, fell on November 4. The weather was cooler than previous years.

By sunset around 6 pm, the throngs of people many with faces in sugar skull makeup, made the 4 blocks of Market Street between University Ave and 12th St nearly impassable.

Every year I face the same dilemma.

How do I get from one stage at one end of Market St to the other to catch a performance?

When the festival opens at 1pm, the light is overhead and not the best for pictures, but by 3pm, it starts to get more interesting.

So I often juggle best light against most interesting photo possibilities.

Every year I swear I will get the program at each of the stages and make some sort of  master plan to try and catch everything,  but the plan goes to hell the moment I run into someone I know with a camera.

Next year, I might wear a mask or  I’ll have my friend Fryda Fernandez to paint my face so no one will recognize me.

I ran into a lot of photographers: Dennis Crawford, Terriss Brown, Janice Kuhn, Afshin Maleki, Steve Dianda but did not see James Ortiz. Naturally I can’t mention the ones I dodged–the ones I saw from a distance.

It was always great to see former colleague Kurt Miller who traveled light with just his trusty iPhone 6.

The Aztec dancers continue to challenge me year after year.  I hope to get a good picture of them one of these days.

I heard there were Mexican Lucha Libre wrestlers but I never got around to making pictures of them.

The altars at  White Park will always be my favorite because the folks who congregate there love having their pictures taken.

No one has ever turned me down whenever I ask if they’ll pose for a picture in all the years I’ve been attending this festival.

Just ask Afshin and Steve both of whom I ran into  at White Park.  They came up to me and introduced themselves explaining they met me when I spoke to their South County Photo club over a year ago.

At that moment I noticed  Miriam Martinez and her two boys  because I saw they were decked out in festival costume and I asked for 5 minutes of their time.

I didn’t have a light stand so I had to ask another stranger, Daisy Meza to hold my Speedlite which I fitted with a CTO gel inside a Lumiquest softbox.

Thanks so much Daisy and Miriam.

During the festival,  Market Street  always comes alive once the sun goes down. Maybe it’s the intermingling aroma of carnitas, popcorn cooking, funnel cakes and grilled kielbasa wafting into the night sky that brings the crowds and their appetites.

Inevitably by 8pm the $2 tacos are sold out and the crowds gather at the $3 taco booths until everything edible is sold out.

El Dia de los Muertos (Day of the Dead) 2017 festival in Riverside from Peter Phun on Vimeo.
[Galleries 96 not found]

There was sour note to this year’s festival though. Someone stole one of the portable  generators the festival organizers rented to provide electricity for the vendors.

There was a plea for the return of the generator with a reward of $500 no questions asked.

If it doesn’t reappear, the festival organizers will have to fork out $4180 to replace it and this will surely affect next year’s festival.

Please share this post and the slideshow below with your family and friends. Maybe I’ll see you next year.