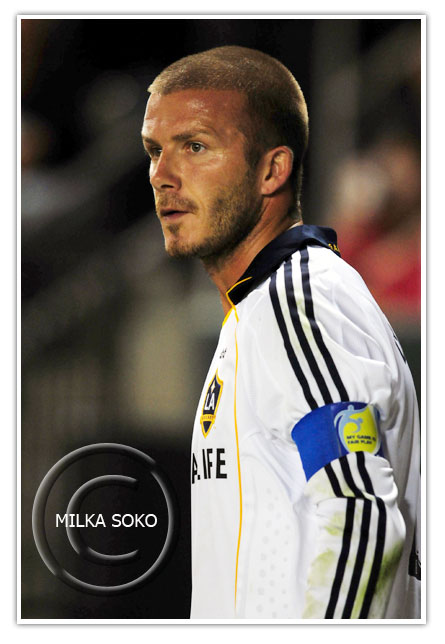 Without access, you won’t succeed even if you have the most comprehensive array of lenses out there.

So if you have access, you’ve already improved your chances of success by at least 40%.

The other keys to success?

You  have to be able to anticipate and concentrate for long periods.

David Beckham appears to be moving to AC Milan if all the parties concerned can come to some sort of agreement. His presence in Major League Soccer has not had the impact. I think it was asking too much of just one player, no matter how skillful, to have that kind of effect. Remember other great players have come before him, Pele, Beckenbauer, George Best and to name a few, didn’t succeed either.

Being knowledgeable and following a variety of sports, not just the popular ones, is crucial.

And finally a good ounce of luck doesn’t hurt either.

What exactly should you be looking for besides shooting great action? 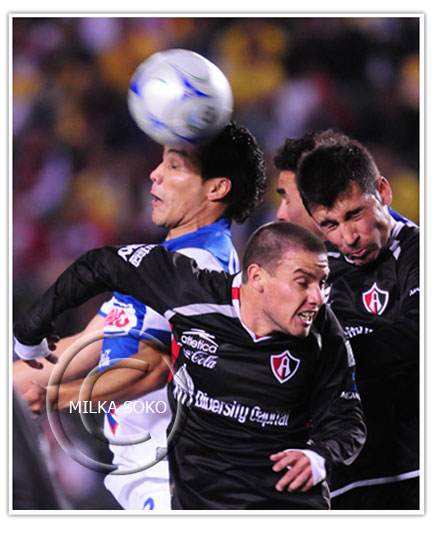 Back of heads are not terribly engaging.

I think we are so in tuned to seeing faces, we don’t realize it.

We do want to see faces of athletes whenever possible.

Grimacing faces add to the drama and excitement.

Unfortunately some athletes hardly show any emotions even when they win.

Faces in sports can be the difference between a good picture and a great picture. 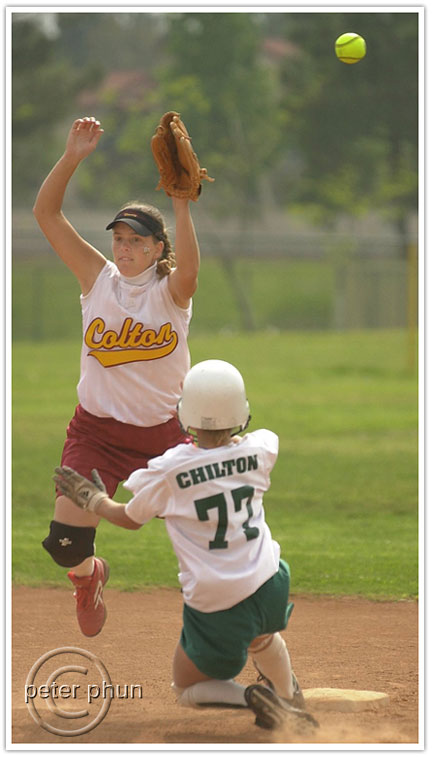 Peak action is probably what you’re after.

There may be some luck involved but a softball picture without a visible ball is not as exciting.

Without the ball, you don’t get a sense of how close the play was, how bad the throw was et cetera.

With baseball and softball, the play at a base has to be close.

If the throw is early or too late, the ball is either in the glove or out of your picture.

That’s not your fault. It’s just how the game goes.

So the element of luck is there for sure.

With ball in the picture, you can see how close the sliding player came to being out.

You should take notes on whether the player was out on that play. 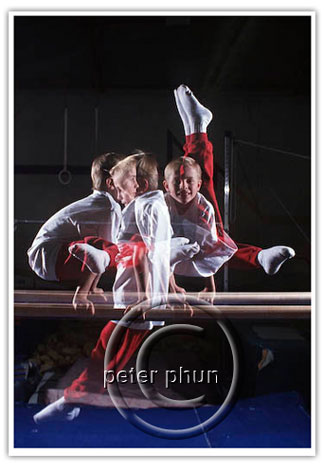 Strive for a different viewpoint to surprise your viewers and to give them a fresh look of a â€œtired-lookingâ€ sport.

This may be something as simple as shooting when weather is not so good sometimes.

Or even simply being creative with your photographic technique.

It may mean working harder by bringing in more equipment but your efforts will be rewarded.

If it it doesn’t work, you’ll at least learn something new.

Multiple exposure images are harder to do on digital cameras but not impossible. I just don’t happen to own a camera body that allows me to shoot multiple exposures on the same frame.

The picture on the left was shot on slide film. I cocked the shutter 3 times without advancing the film and popped the flash during the young gymnast’s routine

Too often inexperienced photographers don’t consider this at all.

It is understandable in a way. They arrive at the event and are caught up with the raucous crowd.

They probably won’t realize this problem with backgrounds until they see their images on a computer screen.

Shooting with wide open apertures on long lenses can only do that much sometimes, so be on the lookout for what’s behind the subject at all times.

Variety keeps you on your toes

If you’re serious about sports photography, you should try photographing different sports.

The challenge is trying a lesser known sport.

How about Sepak Takraw?

This is a southeast Asian sport like volleyball but played with feet and the head, no hands.

This sport is so fast, the video below is slowed down so you can see the movement, intensity and acrobatic prowess of the players.

I know I better thread lightly here or I’ll get a ton of hate mail from golfers. This is just my opinion.

Just the same way most Americans don’t get soccer, I don’t get golf. I do know I would enjoy the sport if I could afford it but as far as sports go, next to baseball, golf is one sport I never enjoyed covering. 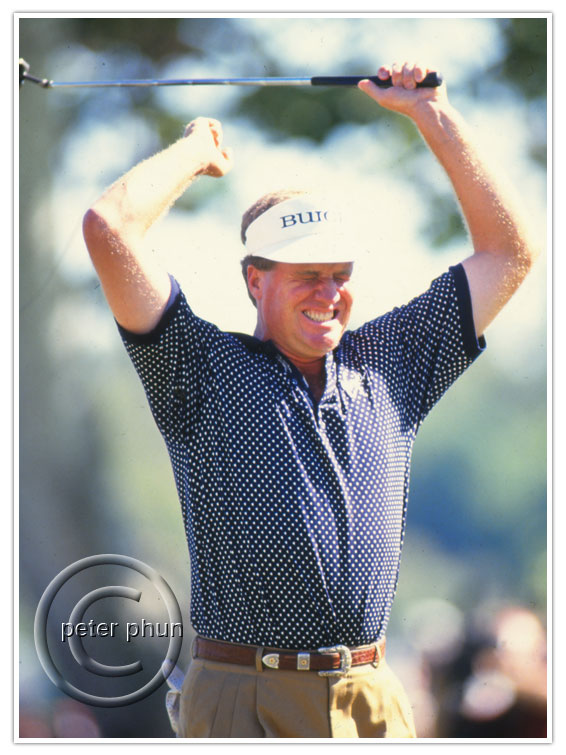 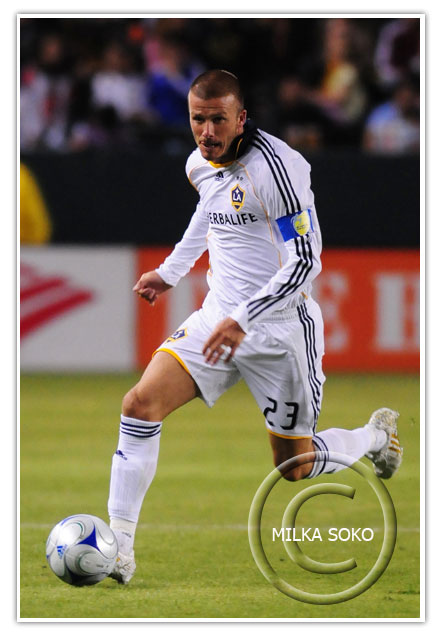 My favorite sport soccer happens to be  pretty tough to shoot.

Most of the time you have to park yourself on the field and just hope you’re in the right place at the right time.

But it is not physically as demanding as covering golf or football.

You generally get your long lens, park yourself near the corner post and wait.

Unfortunately for me, the newspaper I worked for never cared much for soccer.

Their attitude towards soccer was understandable since US soccer has an image problem.

So I got to cover very little of that.

According to my good friend Milka Soko, lighting at the Home Depot Center where the Galaxy plays is decent with expected lights falling off at some places. Her exposure was ISO 800 1/500 sec @ f2.8. She uses a Nikon D300.

Luckily I have important friends in high places.

My good friend Milka Soko was happy to share her pictures below.
[svgallery name=”soccer”] 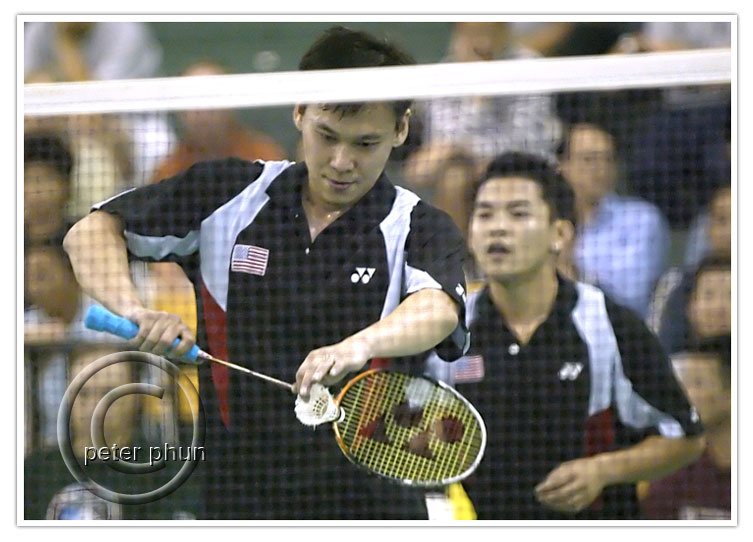 Tony Gunawan, former Indonesian doubles ace, and his partner Howard Bach won the World Championship title in Mens Doubles for the US in 2005 when the event was held in Anaheim, California.

Lighting conditions at most indoor gyms are very poor. The exposure for this picture was ISO 1600 1/200 @ 2.8. That was not enough to freeze the action at all. The audience were also lit, so there were very few spots on the court to shoot from where you could find an uncluttered background. This picture had to be taken through the net because I didn’t have access to a longer lens.

Anytime you step indoors to cover a sport, you are heading into low light and very limited options. In general, sports photography requires long lenses since you can’t be near athletes.

The fastest telephoto made is probably Canon’s 200 mm f1.8. Extremely rare, this lens is probably upwards of US$7,000 if you can find it. Of course the Nikon folks will point out that they had a 300mm f2. I had a chance to use one when I was an intern at the Buffalo News. Sorry folks, both lenses were manual focus. I wonder those few photographers out there who bought one are still using them especially with their autofocus digital SLRs. If you know of anyone still using this, let me know.

That monster of a lens made a 300mm f2.8 look tiny. The objective, (front of the lens) was so big the lens was front heavy.

The world’s fastest racquet sport, badminton, is also hardest to photograph because of the lighting conditions and how the indoor stadiums are lit.

When covering any sport, you need to understand how the game is scored. Not knowing when a game is about to end will be disastrous for a photographer because they will no doubt miss the jubilation of the winner.

The International Badminton Federation has experimented with various scoring formats over the years and have settle d on the best of 3 games which is called the Rally system. First to reach 21 wins like in table tennis.

Up till this point, I haven’t mentioned those two settings because those are variables too difficult to predict until you are actually there.

Also, you will have to make some decisions about how much digital noise you’re willing to live with.

Photographers without the budget to get newer cameras can try a software solution like Noise Ninja for about $80.

Most sports photographers have at least a 300mm f2.8 lens at a minimum.

They will also carry a 70-200 f2.8 lens and most likely that has built-in image stabilization.

And the majority of sports photographers take their pictures at f2.8 to blur out the background but also to get the highest possible shutter speed to freeze action.

Every now and then, they may need more depth-of-field but very rarely.

That by the way is why under the one of the Auto modes, you see the icon for Sports or someone running.

So 2 bodies are pretty standard.Â  One body is attached to the long telephoto which is mounted on a monopod for support.

To successfully hand hold a lens like that with little camera shake would require you to use a minimum shutter speed of 1/500 sec.Â  Needless to say, Milka who is a professional, based her choice of settings on this.

The one good thing about shooting in artificial lighting like a soccer stadium at night is this: once you have the exposure down, it doesn’t change very much, unlike a daytime game when the Sun changes position in the sky or goes behind a cloud suddenly.

The other advantage is the crowd in the stands are not lit, so they aren’t as distracting.

An excellent website where lots of sports shooters and photojournalists hang out is what else? Sports shooter. To be a member, you have to know a member who will vouch for you and you pay $75 a year.

The perks to belonging to the group is that you get access to their classifieds where used equipment can be bought or sold with some degree of safety without being ripped off.

I don’t shoot enough sports these days to belong to this group. It’s a good resource to bookmark so that you can learn what the professionals are doing.