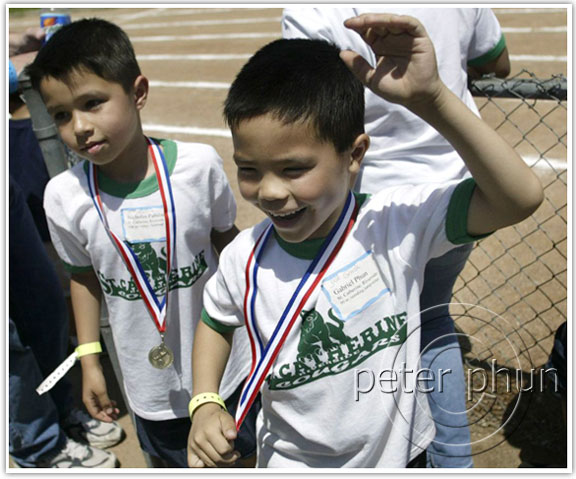 As the photographerin the family, we often have to take one for the team.

By that I mean, â€œweâ€ often don’t get to just enjoy the moment as a spectator.

It’s worse if you’re the coach and you’re trying to photograph the game as well.

Been there and done that.

By the end of the game, my brain is totally fried from the multi-tasking.

Celebrating his win–Once you’ve mastered the use of your camera, you’re ready to think about all the â€œwhat-ifs.â€ Ask yourself, what might happen next. Where’s the picture most likely going to happen? Since this is your child, you will know them better than anyone else.Â  That’s the key to being ready at the right place and the right time with the right lens–anticipation. Canon 1D. 17mm lens. 1/8000sec @f2.8 ISO 200. 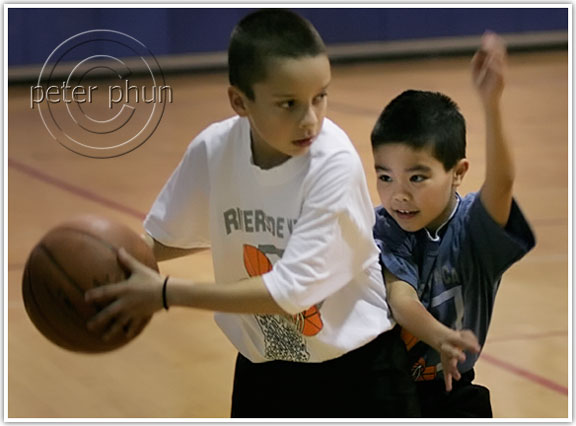 Bad combination, poor lighting & fast action–. Even with the best equipment, indoor sports is a challenge. The low light levels make it next to impossible to freeze action or else the problem is the cluttered backgrounds because the audience is so close to the court. To make this image presentable I had to apply a dose of Noise Ninja. Canon 20D. 80-200 zoom 1/125 sec @f2.8 ISO 1600.

When I’m peering into that viewfinder, even with both eyes open, I am very focused on what I see within that frame.

Those of you who have covered sports will know what I mean.

But you don’t even have to shoot sports professionally to relate to this.

Training that telephoto lens on your kid who’s about to score a goal is a good example.

The angle of view is extremely narrow.

That ball is visible for very brief durations in that viewfinder.

The tighter the framing, the less of the ball you’ll see.

When you trip the shutter, there’s momentary darkness as the mirror moves up and out of the way to let light through and the curtains open to expose the sensor to light.

This all happens in a fraction of a second, so you can’t often see if the ball crossed the goal line.

Your clue might be if the crowd goes wild. But confirmation by the referee’s whistle is the only sure way to tell. 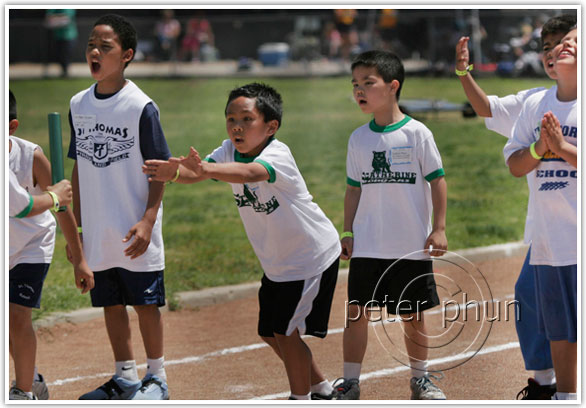 A blink of an eye–It wasn’t until I got back to my computer that I realized how close I cropped this picture. In sports photography, an extra frame can be all the difference since there are no â€œdo-oversâ€. If I could, I would certainly want to show more of the face of the kid on the right. He was looking skywards as if looking for divine intervention. Canon 1D. 1/2000sec @ f4 ISO 200.Â  80-200mm zoom at 150mm.

It’s a good idea to grab a shot of the score board immediately after.

That will be useful when you’re editing to tell you when that picture was taken during the actual game.

Newbies often dwell on that ball whether the sport is basketball, football or soccer.

Once that play is over, the ball is no longer important.

THE PICTURE is the EXPRESSION on the person who just shot the ball.

You should be tracking that person who just shot the ball.

Why? Your role is not to arbitrate or to prove it they scored with your picture.

As a rookie, the first basketball game I shot, I actually shot a closeup of the ball entering the hoop! That was how literal I was thinking.

I suppose I should be embarrassed to admit to that but go ahead and laugh. I did.

It was only in retrospect that I realized photography isn’t at all literal.

Now if the story of that particular game was that there was some dispute over the ball not entering the basket, I suppose the picture would have been important.

In a sport like basketball where the score is often 3 digits, just take my word for it, having the ball in the picture is good but sometimes not the most important thing.