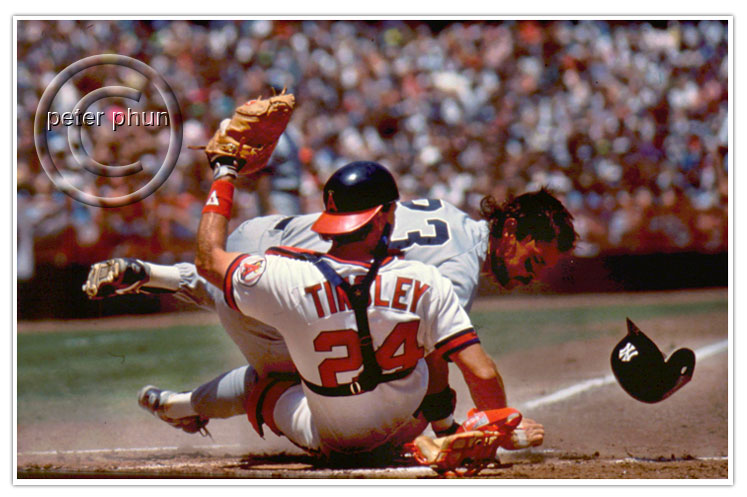 Baseball was not my favorite sport to cover. Bases can be loaded inning after inning and no one scores. Then out-of-the-blue, all hell breaks loose and a collision at home plate occurs. Thankfully I wasn’t asleep here. Picture taken with a Nikon F4 triggered by a foot pedal. 180 f2.8 lens prefocused at home plate. Fujichrome 100 1/2000 @ f2.8 . Angels Stadium, Anaheim.

So let’s assume you’re in and you’ve gotten the nod to shoot your first sports assignment.

Sorry, those professional baseball, basketball and Big 10 college football games will be covered by the staff photographers because they’ll appear on the cover of the section.

Don’t despair, as you get better, you’ll get to the front page of the Sports section. If you have a really good picture, it may run on the front page, but Â let’s not get ahead of ourselves yet. So this will likely be the typical assignment you might get.

Get to know the route to and from the stadium. Arrive early enough to figure out how long it will take to get to the nearest area where you have WiFi or an ethernet cable which you can plug into your laptop for internet access. 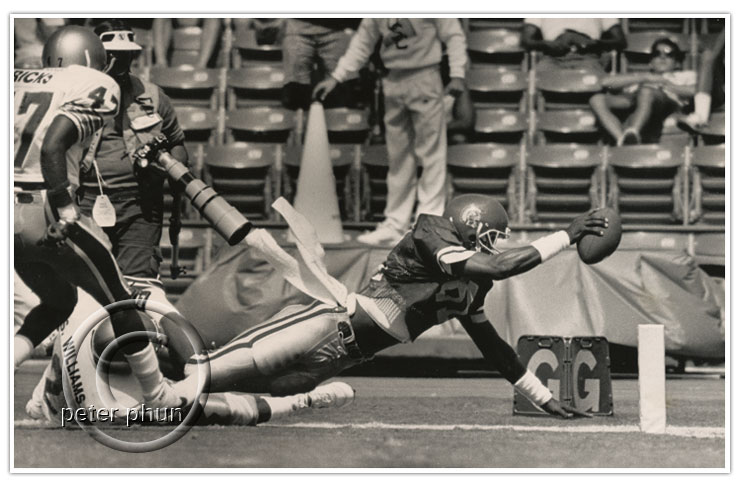 Not my favorite football picture because of that horrendous background. See all that distraction? This picture was used because it was a big play in the game. Canon F-1 with 400 mm f4.5 FD lens. If you know cameras, you know this picture of a USC game dates me.

Grab a team lineup or roster for both teams. 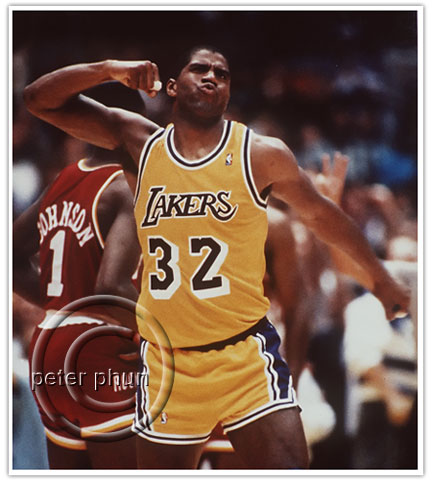 If you can’t get a copy to take with you, photograph the roster so that you can quickly bring that up for captioning when you’re editing.

If you’re lucky, the Athletic Director of the school may make his office available for you.

But let’s assume you have to drive to a Starbucks.

Let’s say it will take you 5 mins.

That means you have to leave the stadium no later than 8 pm if they want one picture.

You may be thinking that’s more than enough time.

Don’t forget you have to set up your laptop which you should be “sleeping” and not turning on from a cold start.

If you’re not going to be near AC power, make sure to charge up your laptop’s battery beforehand.

Be careful where you park

Be sure you are not going to be blocked by another vehicle because you will be leaving earlier than everyone else. This is also a safety issue. Have your gear ready to go once you arrive. It’s not a good idea to be digging in your trunk. Opportunistic thieves will see this.

As you gain experience, you can push those time limits more.

A lot depends on how much you shoot and how fast your laptop is.

If you shoot too much and at too a high a jpeg resolution and if your computer is “older,”Â  it will slow you down.

Large files take longer to download. Those files will take Photoshop more time to open, render and save.

If you plan on shooting a lot of sports and are on the Mac platform, consider the faster real world speed of Firewire card reader (pictured on the left) instead of USB 2.0 interface.

Also consider investing in faster memory cards. SanDisk and Lexar make ones for professionals that “read” and “write” faster giving you higher performance for quicker bursts and faster downloading. Currently there are also firewire 800 interfaces for card readers.

A few seconds here and there may not seem like much, but over a 100 or 200 images, that will become significant.

The majority of Â professional sports photographers do not tweak their images very much.Â They check sharpness, dodge and burn, caption, crop, save and they transmit.

Don’t forget you will be sorting and deciding on oneÂ  picture where you will need to identify all the players in it. So when you’re shooting, everytime you think you have a good action sequence, be sure to photograph the back of the jerseys of the players involved in the “play” to help you id them later.

Football and ice hockey players have an annoying knack of looking alike once they don their gear, or don’t you know that? IfÂ  that never occurred to you, don’t feel bad. I made that mistake when I was a rookie.

I ended up driving to the coach’s house with a wet print in hand at the eleventh hour. And mind you that was in the days when we shot film and made prints. 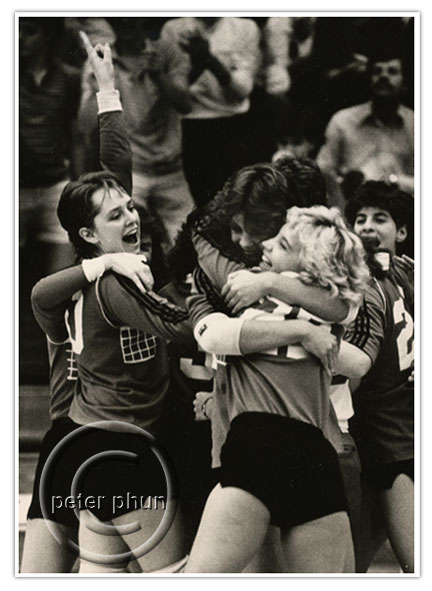 Capturing a moment like this will be expected of you as you get better but correctly identifying all the visible faces in this picture is what makes readers appreciate your efforts more.

In photojournalism where deadlines are critical, the most recent pictures tend to be more important.Â  Game winning playsÂ and post-game jubilation are such examples. Later, as you’re editing, you might find another player had a very good game with outstanding statistics, then go back and look for extraordinary images of that player. 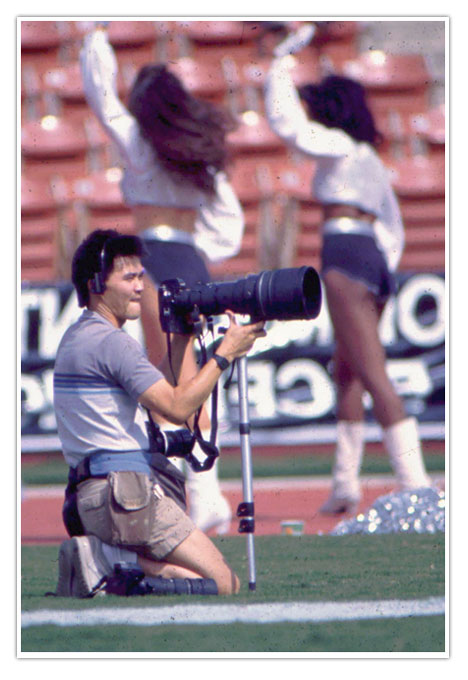 Use the team roster

Open the picture you took earlier of the team rosters. Minimize it and keep that handy. You’ll be referring to that for correct spellings and jersey numbers.

Most photographers don’t try to fine-tune the color because they are not in the most “ideal” locations when working on their pictures.

If you’re told they need only one picture,Â  pick the one you like the most. Remember, the editors at the paper weren’t there.

From the sidelines of a LA Raiders game.–yours truly, listening to the game on radio holding a Nikon F3 with a 400mm f2.8 on a monopod.

So how many rolls of film did I blow through in a typical game?

Strangely if I shot more than 6 36-exposure-rolls of film, it usually meant I didn’t have a good game. That was my magic number. When I went through too much film, it meant I wasn’t getting into position and anticipating well and was getting desperate instead of concentrating and being in the right spot for a big play.

They may ask if you have this and that, but in the end, it’s your name that goes underneath the picture. You should feel good about your choice. In all my years at the paper, I lived by that motto. It has always workedÂ  for me. The trouble with giving in to what the editors want is this: they have a picture in mind and that’s a tainted, it’s not necessarily the best picture. You were there, only you can be the judge of that.

Whenever possible, identify people in your pictures left to right.

Names with ages and the city they live in and other facts which might add to the picture. In the case of a soccer game, the name and the player’s position e.gÂ  AC Milan midfielder Ronaldinho (left) celebrates with teammate Kaka after scoring the equilizer in the dying minutes of the game against Barcelona.

There may be more to this but generally speaking, after you hit click the mouse to “Send” or the “Return” key to transmit your picture, you can relax.

Call your supervisor/photo editor to make sure they receive it after a few minutes and go grab a cold one.

You’ve deserve it. Making deadline may not seem like a big deal but sports photographers are constantly juggling how much time to spend shooting and how much time to leave in order to make deadlines.

If I’ve left out anything or haven’t explained something well, leave me a comment and I’ll be glad to explain further.

7 thoughts on “Freelancing for Newspapers–Part 3”

Jada looking fantastic even against a plain white

Marisol Ramos waited patiently with me for the bri

Another year means we’ve all made another trip a

When I caught up with Ariana from Ballet Folkloric

She screamed enthusiastically. She clapped. As she

What makes this challenging but also the most fun

Lianna in the shadows. 2 Canon 600EXRTs in a Photo

Taylor @clearkit with a cityscape on a plain white

Ksenia perched on top of a wooden carousel style h

Chidiogo up at the top of the stairs. @gogo.a__ M

Paris @parisyvanna with a projection against a whi